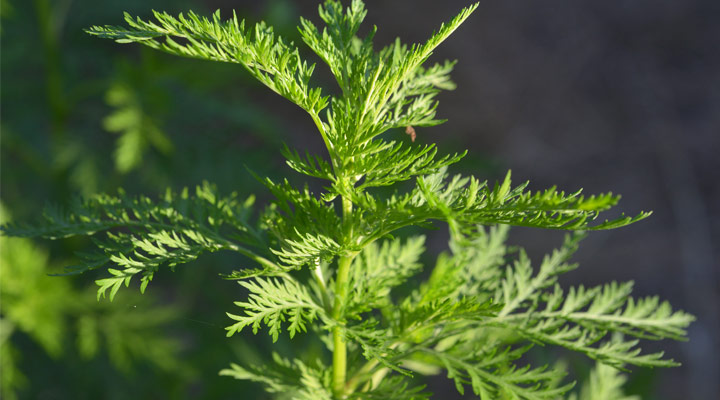 Today we know that the active ingredient present in Artemisia Annua , artemisinin, is extremely effective in the treatment of Malaria , one of the worst epidemics on the planet that kills over 2 million victims every year in Third World countries.

Around 1994, prof. Henry Lai and his assistant, Prof. Narendra Singh began to hypothesize that Artemisia Annua could also be effective in the fight against Cancer .

In fact, they examined the extraordinary effectiveness of the chemical properties of artemisinin on breast cancer cells. A study mentioned in the new edition of Life Sciences describes how this substance virtually kills all human breast cancer cells within 16 hours .

Prof. Lai says: “ it would seem that it not only works but it does it selectively ”. He adds: “ It is highly toxic to breast cancer cells, but to normal cells it has only a negligent effect. “

” Cancer cells need a lot of iron to replicate DNA when they divide,” Lai explained. “As a result, cancer cells have a higher concentration of iron than normal cells. When we began to understand how artemisinin worked, I began to wonder if we could use that knowledge to work on cancer cells . “

Lai devised a potential way to start seeking funding by obtaining a grant from the Breast Cancer Fund in San Francisco. Meanwhile, the University of Washington patented his idea.

The fundamental idea – Lai and Singh affirm – was to “inflate” cancer cells with the maximum concentration of iron , then introduce artemisinin to kill the cancer in a selected way . In this study, only 25% of cancer cells remained after 8 hours. But after 16 hours, almost all of the cells (98% to be precise) were dead .

The next step, according to Lai, is to test on sick animals . A previous study was done on a dog with bone cancer , so severe that he could not even walk: he recovered within 5 days of treatment . But certainly a more rigorous sampling is needed.

So far we have only talked about in vitro studies, so research still has a long way to go before reaching a real breakthrough. In substance we are still in the preliminaries.

The story of Amedeo Gioia

In September 2013 Amedeo was hit by a heart attack and hospitalized at San Filippo Neri, he was applied 3 by-passes. Having had blood loss in the catheter, he underwent a urological examination from which he was diagnosed with the presence of a very large papilloma which, given his condition, could not operate surgically .

After his hospitalization and rehabilitation, Amedeo was admitted to a clinic by the urologist Dr. Serafini, who gave him a TURB cleaning his bladder. From the histological examination, Dr. Serafini found high-grade nuclear tumor cells .

After 7 days of hospitalization, the Oncologist prof. Lanzetti told him that the infiltrations were useless, since the cancer had passed to the prostate and had come out in the peritoneum leaning on the ilium and that he should have everything removed.

However, given Amedeo’s delicate state (given his heart problems) the doctors refused to take the responsibility of operating him and he was sent home with a life expectancy of a few weeks, or at most a couple of months. He was also advised to undergo chemo cycles that “maybe” would have prolonged his suffering by a few more months.

The discovery of Artemisia Annua

With the intent of finding something that would help her to bear the pain , which in the meantime had become excruciating, Amedeo, with the help of his children, began to do research on the internet .

Thus he ended up discovering Artemisia Annua and the study (published in the previous chapter) in which he spoke of the in vitro efficacy of artemisinin in killing cancer cells.

Not having found posologies on the use of Artemisia, Amedeo relied on intuition, common sense and also on luck. They opted for the hydroalcoholic extract of Artemisia Annua and reading that the cancer cells are loaded with iron, Amedeo decided to also take a vial of tonic iron, one early in the morning for 2 days in a row, and then suspend it so as not to risk feeding the cancer.

This is the exact therapy that Amedeo also published on the Facebook group “ Quelli dell’Artemisia Annua “.

After only 2 days Amedeo states that the pains had completely disappeared and after only 6 days he did an ultrasound that showed nothing and did the blood tests for the tumor brands that were normal.

Then he also did a CT scan which detected absolutely nothing. No trace of the tumor . In the following months and years he then repeated new tests to ascertain the total disappearance of the cancer. All the exams have always given negative results.

Here is the audio in which Amedeo Gioia testifies to his recovery from Cancer thanks to Artemisia Annua .

Where to buy Artemisia Annua?

In therapy against Cancer it may be useful to combine traditional treatments with Artemisia annua both in the forms of hydrolyte (herbal tea), as a hydroalcoholic extract, or as a titrated dry extract.

These products are available at some specialized pharmacies.