Artemisia: here is the discovery that is worth the Nobel Prize for medicine 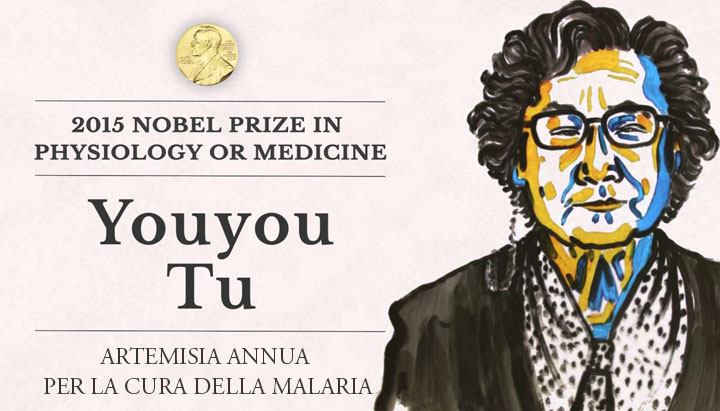 The traditional Chinese medicine (TCM) is counted among the alternative medicine and is believed to constitute the oldest known medical system.

That it is effective against numerous pathologies is a fairly widespread belief, even without the need to resort to statistical data. But that it was possible to start from there to get to the Nobel Prize for medicine and physiology was not at all obvious. Instead, this is precisely the path followed by the now 85 year old Chinese Youyou Tu , one of the leading figures of the Academy of Traditional Chinese Medicine in Beijing, who yesterday was awarded the prestigious award, sharing it with the couple formed by the Irish William C. Campbell and the Japanese Satoshi Omura: half of the € 855,000.00 will go to her , while the other two will share the other part.

For all three it was a recognition for the development of new therapies particularly effective in the fight against parasitic diseases : for Youyou Tu the target was malaria and the treatment is linked to a drug of plant origin, the Artemisinin , obtained from the medicinal plant Artemisia Annua ; for the other two the goal is the treatment of some infections of parasitic origin thanks to the action of Avermectin and its improved version Ivermectin.

We talk to Donatella Taramelli, Professor of General Pathology at the Department of Pharmacological and Biomolecular Sciences of the University of Milan, about Youyou Tu and his discovery now awarded the Nobel Prize.

Is the scourge of malaria still so heavy and widespread worldwide?

Unfortunately, yes , even if the phenomenon is underestimated by the public opinion of nations like ours. The data are impressive, especially in Africa, South East Asia and South America, and therefore in the entire tropical belt. The estimates contained in the latest WHO report of 2014 speak of 400 million cases per year ; the greatest mortality occurs in Africa and affects children under five.

The cause is always the known one …

It is the parasite of the genus Plasmodium transmitted by the bites of the Anopheles mosquito : it is she who takes it from infected people, makes it reproduce in its intestine and injects it into other subjects. It is therefore right to do a preventive treatment by eliminating mosquitoes, but the main problem is not them, who live a few days and fly no more than two hundred meters; even better is to get to the root of the problem, treating the carriers of the infection .

So we have to talk about drugs. Before the now Nobel Prize-winning discovery, what were the therapies and how effective were they?

The use of quinine is well known , which we have known since the Jesuits brought it from Peru and which is still in use; but it has many side effects and then encounters resistance phenomena . However, its active ingredient was only discovered in the last century. From quinine, during the Second World War, chloroquine was obtained as a synthetic product, which was very important as a low-cost, highly bioavailable, orally active drug. The trouble is that after the middle of the century in South-East Asia the resistance of the parasite to chloroquine has begun to increase ; resistance which then spread and rendered it ineffective .

Then fortunately this new active ingredient extracted from Artemisia Annua was discovered: what is the value of Youyou Tu’s discoveries?

L ‘ Artemisia annua and its therapeutic properties in traditional Chinese medicine were already well known: we have documents dated to 168. C., such as the Discourse on 55 treatments for different diseases, which speak of its anti-fever properties . The merit of Youyou Tu was to isolate the active principle , after having made an extensive screening of all the hundreds of plants indicated by Chinese medicine for the treatment of malarial fever.. It was she who had the intuition to go and look for traditional extracts, going up the entire historical path; a bit like we are doing now with some plants of traditional African medicine. In reality it was a great job by a group she led, also strong in her analytical skills as a graduate in chemistry. In addition to the isolation of the molecule, the advantage was to have found a very effective method for the purification and crystallization of the molecule: a method that is still used today.

When did the discovery happen?

The first publication is from 1977 . The story began during the Vietnam War and is an interesting story. It was North Vietnam that asked Mao’s China for help, in full cultural revolution, to have an effective drug against malaria that was decimating the troops. Thus began Project 523, involving several groups including that of Youyou Tu who was able to extract the active ingredient from plants, to develop the methodology suitable to keep it active and to find the first derivative herself and then give it to a large Chinese pharmaceutical company the possibility of producing it. All within 6-7 years, which is an enviable time for a new drug.